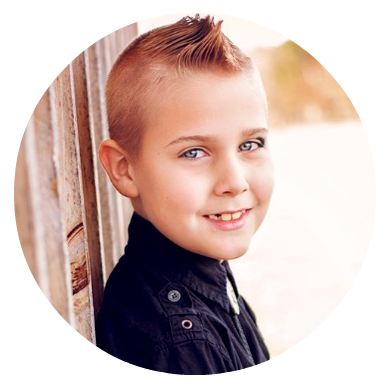 About, I would say, eight weeks into it, I started noticing little changes. We finally made it through the first three months. We were going to our cabin in North Carolina and he started reading road signs.

When we sat down to do homework or anything, we would just both be in tears. He was crying, I was crying, and it wasn't just his words. When you're dyslexic, when you have a group of sentences together, there's words everywhere.

It took him a little while to learn certain things like balancing or tying his shoe or just things that you would normally learn at a young age – sounding out letters the proper way, that kind of thing. When he got in pre-K we noticed that he was not putting certain things together as he should be. Then when he got in kindergarten and they start forming small words to start to read, he was not doing that. His would-be backwards or he would try to sound it out backwards, literally. We knew that he had an issue but everyone kept telling us that no, he didn’t, that you can’t tell that until they get older. When we sat down to do homework or anything, we would just both be in tears. He was crying, I was crying, and it wasn’t just his words. When you’re dyslexic, when you have a group of sentences together, there are words everywhere. Socially Ty never made a whole bunch of friends, because they seemed to do things quicker than he would.

He wanted to be able to ride a skateboard and he couldn’t. His balance wasn’t there. He couldn’t tie his shoe in second grade. There were certain things, and it wasn’t that he couldn’t do it, it’s just his brain wasn’t connecting.

I made arrangements to get to Brain Balance and have him tested. My husband came in, he’s like, “Kristina, it’s not a magic pill. It’s not going to fix it.” I say, “I’m not saying it is, but let’s try it for three months. What can we lose? The worse thing that can happen is we end up putting the money out there and putting him through this and then he’s still where he was when he left school in May.”

About, eight weeks into it, I started noticing little changes. We finally made it through the first three months. We were going to our cabin in North Carolina and he started reading road signs. It was just a really, really drastic change from what he was. Then he was starting to pick up on certain things that he never picked up on before. He was starting to develop the whole sentence instead of just part of the sentence. We were starting to see huge differences. Not massive differences in three months, just differences in the aspect of he was starting to actually do things that a second grader should do. We decided to leave him in there for another three months to do the full six months. By the time we got to the end of those three months, he was riding skateboards. I mean, his balance was just like, unbelievable compared to what it was when we went in. He could read. He was making all of his AR goals at school. He’s in boxing now. He’s been doing boxing because of all the coordination that you have to do. That keeps his brain going, you know? Then he does soccer, stuff he would never do before. He’s making all As whereas before he was barely getting by.