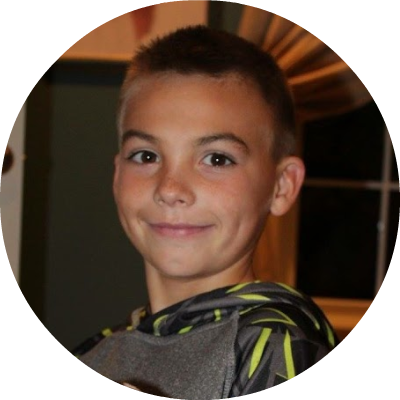 We are not as stressed as we used to be. We have better family time. We all follow the rules that Tucker’s doing. Go through exercises with him. We all do the eating program. So personally for me, being the mom, it has been wonderful. We’ve had great results from what we can tell so far.

It's given Tucker more confidence. He's more confident in himself and more assured of what he's doing. Our family dynamic has changed a lot.

Tucker before Brain Balance – I could tell from the very beginning that Tucker wasn’t doing the same things that his older brother did at his age as far as everything, rolling over and crawling and all of that. From the very beginning, the time that he was little, we kind of just could tell that something was a little different about him. As he got a little bit older, he had speech issues. We would try to find him help and get him therapies and stuff that he could do, but he never fit in a box. He never was diagnosed. No one could ever tell me exactly what it was.

Then he hit kindergarten and was way behind. We had him in speech. We had him in language. We had him in therapies, in physical therapy – anything we could come up with and anybody through a school or some sort of organization could help us. School has always been hard for Tucker. His self-esteem was always very low. He was not confident. We could tell he struggled. As he got older, he started to graduate out of all the programs. They would tell us, “He’s done. He’s completed everything. He’s at a hundred percent.” Then it was obvious to us and always obvious to his teachers that he wasn’t done. He did need more help. Nobody could tell me what it was. It was like there was this big open space that everybody knew there were problems going on through school or through an educator or a teacher or something like that. Nobody could put their finger on what exactly it was.

Until we went to Brain Balance. Then, just walking in there just with one evaluation, they were able to tell me exactly how my child was, what was wrong with him, the different struggles that he had just out of seeing him one time, and was right on.

His teachers noticed across the board, everything, his ability to listen better in class, and to comprehend what was going on. His scores were higher. He was doing well on his spelling test. That was kind of in the beginning. It was awesome now that he will speak up in class. He’s willing to answer. When they do little plays, he’ll actually take a part and participate and give his opinion. Before, his game plan was just to hang out in the back and not draw attention to himself. Now they see a different kid, definitely in school, socially and with his homework and everything.

It’s given Tucker more confidence. He’s more confident in himself and more assured of what he’s doing. Our family dynamic has changed a lot. I would definitely recommend it because we’ve seen such a good result.

We are not as stressed as we used to be. We have better family time. We all follow the rules that Tucker’s doing. Go through exercises with him. We all do the eating program. So personally for me, being the mom, it has been wonderful. We’ve had great results from what we can tell so far.

Dr. Rebecca Jackson, Vice President of Programs and Outcomes for the Brain Balance Program, was […]

In this episode; Rebecca Jackson, Vice President of Programs and Outcomes for Brain Balance, was […]

This Brain Balance Exercise Challenge combines physical movement with a lesson in spelling. […]