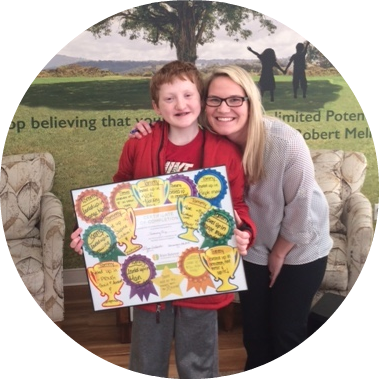 Tommy doesn’t throw fits anymore. He just walks into school. He’s excited to be there. He’s happy. Energetic. He’s doing happily. He’s answering questions happily. His real personality has come out instead of the anxiousness.

I talk about Brain Balance all the time because it's just so fascinating to me how it actually works. It really makes sense. And, if you realize the changes that your kids do so quickly, it's worth the time commitment.

Tommy was very anxious. Very timid around people he didn’t know and anything new or different he didn’t like to do. He liked to stick with his favorite foods and favorite shows and favorite places and favorite everything. He wouldn’t divert from his favorite things. As far as school goes, Tommy came up with every excuse in the book not to go to school before Brain Balance. He would literally throw a tantrum almost every single morning. I would have to physically drag him into school. Kicking and screaming and crying and then he’d calm down once he was in there. He would get so upset that he would just throw up … when he was younger he would run around and throw up, which made it even worse.

He just had one good friend at school. She’s a girl. So he didn’t, he was not, she invited him many times. He was not allowed to go over there for sleepovers because we just didn’t trust her. But he, no he wasn’t, not really invited to birthday parties or anything. Last school year, so fifth grade, it was just getting to be like a really, it was coming to a head. He was just crying all the time. Didn’t want to go to school. Really upset all the time.

We took him for a Brain Balance assessment and they explained Tommy to a tee. I mean, everything was dead on about everything that we’ve seen from Tommy for eleven plus years at the time. It blew my mind. It was something that we really wanted to do and we just knew we had to figure out a way to make it happen. Through the program, he changed his whole … I don’t want to say he changed his personality. I like to say that his real personality came out and he wants to play outside more. Tommy doesn’t throw fits anymore. He just walks into school. He’s excited to be there. He’s happy. Energetic. He’s doing happily. He’s answering questions happily. His real personality has come out instead of the anxiousness. He comes home and does his homework like we just tell him to do it and he does it, which that’s never happened before.