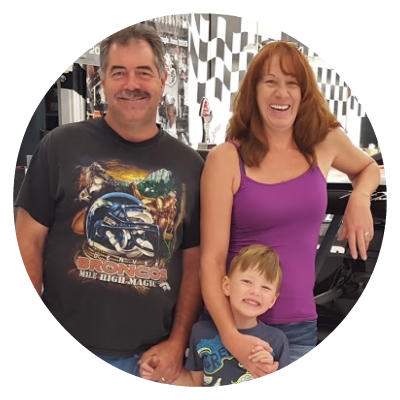 I highly recommend it. If you have doubts, go and at least have them tested. Like I said before, the fact that we were able to catch this at such an early age, when he was 4 and 5, 4 years old, saved him.

He uses his imagination more. He dreams. He's developing a sense of humor. He's much more well-rounded - it seems like he's enjoying life more.

Academically he was very, very smart – he was learning his numbers very fast, and for the analytical part he was doing very well, but being able to put things together, he was teaching himself to read just by looking at words, but being able to put words together in a sentence, he didn’t understand that concept. His behavior would sometimes be very erratic. If he was in trouble for something, he’d say he was sorry and that he wanted to be good, and then turn around 3 minutes later and do the exact same thing again. It never registered from the consequences of his actions. He had no fear whatsoever. He was full-on, full go. He’d even get hurt sometimes and not even have any emotional reaction to pain, it was just not connected.

He would get distracted easily by everything else going on. Socially he was having a real hard time interacting with other kids. We took him to the doctor, and they diagnosed him with ADHD, so they put him on medication for that. Well, basically what the medication did, was it would turn him into basically a zombie in the morning, and then about mid-afternoon when the medication would wear off, it was like he had been bottled up inside of him, and his actions would be way overboard.

We told him at his preschool that he was very smart, and he was a very good escape artist. I think his first 2 weeks of preschool, he escaped out of the playground 3 different times. Running into the street on his own, and he found new ways of escaping that they did not realize were even possibilities of escaping, and we found ways out.

When Brain Balance started actually going through with the assessment and the result and explaining why certain things were happening the way they were with him, and why the right side of his brain wasn’t developed and that’s where the problems were coming from. I remember one thing Steven used to say before Brain Balance. When he was in trouble for something, he would look at us and say, “I want to be good.” “But I don’t know how.” When I sat down during the assessment, they basically looked at us and said, “He’s telling the truth. He really does want to be good, he’s not trying to be bad, but he just mentally doesn’t know how to do that.” At that point, I realized that at 4 years old we were lucky that we caught this now because we heard about all these stories that these poor kids will not …

Now, he can sit and listen, he’s reading. He’s in kindergarten. he’s in kindergarten but he’s in first-grade math, and he’s actually leaning towards first and second-grade reading. He can follow on with the story. I’m able to read him simple chapter books, but to where he’s able to keep the storyline going in his head, and he doesn’t get lost in the details of the actual single words. His social skills are a lot better. We noticed through this process that he’s gotten much more creative. He’s still very intelligent but he’s more creative. He uses his imagination more. He dreams. He’s developing a sense of humor. He’s much more well-rounded – it seems like he’s enjoying life more.

I highly recommend it. If you have doubts, go and at least have them tested. Like I said before, the fact that we were able to catch this at such an early age when he was 4 and 5, 4 years old, saved him.