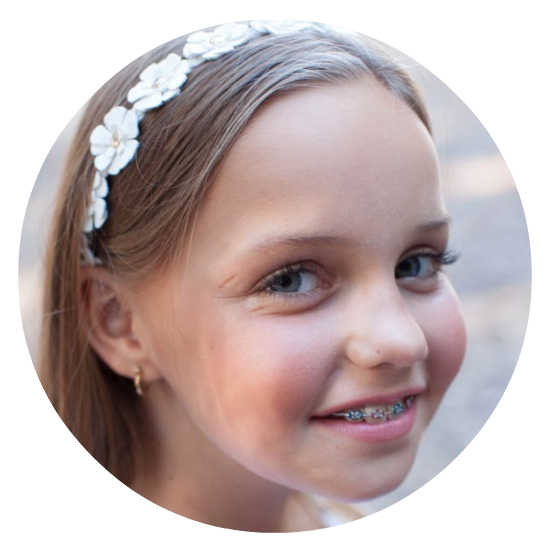 I feel like Brain Balance has the ability to really hone in on the deeper issues of the child and correct the imbalance, rather than just put a band-aid or a brace or whatever you want to call it one making it more doable. I see so many amazing things that come with Brain Balance.

I have my masters degree in education. By the time she was at the second-grade level, it was clear to me that there was something not right. It’s very difficult to navigate when you’re the mom and the teacher, not just the teacher. Then your emotions get all wrapped in it. I started exploring, trying to figure out what her hiccups, what her hangups were. I tell people that I felt like second grade, while we were homeschooling, I felt like we spent the whole year on a treadmill. Trying really hard and gaining no real ground. That was frustrating.

They were able to diagnose that she did have a visual processing delay, AKA dyslexia, which was pretty clear to me based on her letter reversals and things like that, that I was seeing and her very slow ability to read. Reversing letters and numbers. So math, logical reasoning was also very difficult for her. Also attention deficit disorder, and that was also clear. She had a hard time sitting still, dropping her pencil constantly. We did get her an IP through the charter school. It was also the meltdowns that we were having over little things. The clothing she would or wouldn’t be willing to wear based on how it felt. The food that she would or wouldn’t be willing to eat based on similar ideas. Sensory-motor things. Fine motor delay. Some of it academic-related, some of it not. Everything was a battle. Everything was a fight. I was becoming very depleted. We decided I think it’s time to put her in school.

Last year we heard about it on the radio and my husband heard the commercial first and it sounded like our story. Everybody who’s sharing “I feel burned out. I can’t get my kid to cooperate. It’s hard to learn. I’m depleted.” He said why don’t you go check out this place. This looks like a great place. But hmm…It’s expensive. So we’ll keep doing what we’re doing.” Ultimately around spring break time, we were having more fights at home. It was still so difficult to get her to do anything. Then I just said to Chet, “Something’s got to give. Let’s go back to that Brain Balance place and see what we can do.” When we came into the initial diagnostic review, that first three-hour assessment, they did that. When we came back in for the review with Liz, it was eye-opening for all of us.

When they went over the review they were able to clearly diagnose her challenges and say, “This is what we can do to try and help her.” By the time we were done with the review, my husband had tears in his eyes. I couldn’t cry because it was the first time I felt so validated. This is exactly what I’ve been dealing with for the past three years but I didn’t know how to put it into black and white. That’s what the initial diagnostic review was able to do for me. So going to Brain Balance and being able to have them do that initial diagnostic review and have it be so clear, the black and white what they were able to measure, for them to say, “We can help.” That was huge. 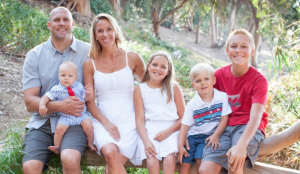 Even after six months, she’s made good improvements but it would be good if she could still keep going. It’s been exciting, it’s been fun. She’s still not completely where we wish she could be but she’s made improvements and I like that Brain Balance is very strategic on what they are able to help her do, and they measure it with the same kind of tests they did. I was really excited to meet with Liz two weeks ago to see her full, comprehensive six-month progress. It’s evidence that some of her sensory-motor issues have really gone down. Clothing isn’t as much of an issue as it used to be. I don’t hear her complaining as much about how things feel funny. I see an improvement in that. I also see academically an improvement. I can say I noticed a difference because I see her behaving better, I see her academics. She’s still below grade level but she’s definitely improved. She did a writing sample for her class and teacher this year. During parent conferences, he showed it to us and she so far grade level I think he showed us like “Here’s your sample.” And he wasn’t saying it was good or bad. But I took one look at that sample and my eyes bugged out of my head because she never would have been able to do that at home with me and I don’t think it’s because he’s been working with her. In fact, I know it’s not because he’s in a public school where she’s one of thirty. It’s because there’s evidence that Brain Balance is actually helping to correct her challenges.

Every time we went we felt like we were going for a cheerleader session. Even if she had had a long day and was tired. She never complained once. Not once. I just think that for me personally the cheerleading squad, the emotional support that I felt from the whole team. The desire for her to be there … She walked, always, two steps taller because she had a whole team of people just loving on her for an hour. That made, I think, truly as much improvement in her behavior as what they were doing with her, with how they were loving on her. I felt like the team was encouraging. She struggles to learn but she does not struggle socially. She is very outgoing and sweet, and friendly, and she loves people. She just loves people. For her to have that encouragement because it’s easy to get down, and deflated, when you struggle to learn and things don’t come easy. To have that team welcome her when she came in the door, love on her for an hour, and I would pick her up and she’d be happy she had spent the time … I was happy to see how much she loved her.

It’s not going to be a magic cure-all. Overall I definitely see improvement and she’s still growing. Our family dynamics are good. I think that Brain Balance maybe has given her more courage and confidence to not quit so quickly. I think she’s definitely improved in her math skills. Her number sense, her awareness. I already was an educator, I already knew where Shannon should be, and I knew her struggles. But there are a lot of parents who feel inept in that department. They don’t understand exactly what they’re up against. They give you hardcore evidence of where the struggle is, and then they pinpoint, “This is what we’re going to work on.” I think that’s awesome. I think that they do it in such a way that everything I shared already with you. They’re encouraging, they re-inflate your child’s confidence, they love on your kids, and they make you as a parent feel like you’re not alone anymore. I was so burned out on trying to help her and felt like I was the only one. To know that every time I was driving out there, even though it might have been a pain to get there, that they were doing something to help her made it all worth it.

If your child has a learning disability, and this is an option to help them would you not send the money? No. It’s not another curriculum, another approach. Because what I find in education both as a teacher and a parent of a child who struggles, is that it’s easy to look for the next quick fix. Our America. We’re looking for the next drug to fix this problem. Okay well, the drug doesn’t fix the problem it just suppresses the symptoms. I feel like Brain Balance has the ability to really hone in on the deeper issues of the child and correct the imbalance, rather than just put a band-aid or a brace or whatever you want to call it on making it more doable. I see so many amazing things that come with Brain Balance.