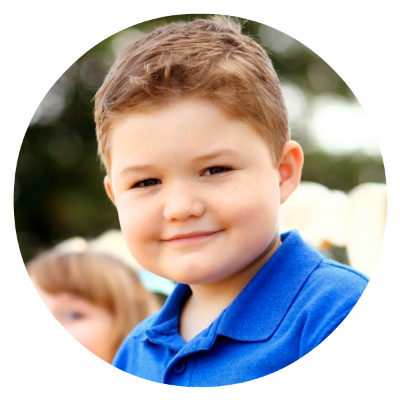 Even while we were in the Brain Balance program I insisted that he maintain physical, occupational speech, and any other therapies. What I noticed after he completed the program was that those therapies were no longer necessary.

He was already part of the system in terms of developmental delay programs that accommodate individuals and provide them with therapy. He had been doing that for quite a while.

We enrolled him in school and put him on an IDP. Any time they would have transitional activities like transitioning from centers or playtime or recess time or any of that, he would have meltdowns. He also had issues with oral stimulation, needing oral stimulation. He was sucking his thumb quite a bit. He started wearing a weighted vest, started using weighted blankets and all of that. There were several accommodations that he needed to have in order to help him with those transitions during the day and to help him focus. At that time he had already been diagnosed with autism spectrum disorder, but at that time they added the diagnosis of ADD. His teacher requested a conference and told us that she could no longer have him in class. It wasn’t because she didn’t want him in class. It was because she did not feel she could meet his needs any longer.

I called another individual, another parent whose child had completed the program, and spoke with her at length. They lived in the same town that we live in. I got her number from the Brain Balance coordinators there. I called and spoke to this individual and asked her a bunch of questions and she was very honest about how much time and how much money and how much commitment we were going to need in order to make the program successful for Ryan.

The thing that convinced me was the corroborating evidence that the assessment from the Brain Balance team provided with what we already knew was going on with Ryan and what other assessments outside that we’ve done with other therapists, his psychological workups, all of the autism instruments that are used to measure the degree to which they’re developmentally delayed and all of that…it was lockstep with what Brain Balance came back with. And so I knew that they weren’t coming up with things that we didn’t already know he struggled with. I’m an engineer by trade, so I’m all about numbers and data. Show me evidence, show me proof kind of thing. They encouraged us to be educated about the program. Before we enrolled they gave us books to read. They really wanted to make sure that we were on board with it, that both of us were on board with it because they knew it wasn’t going to work if we weren’t.

Within about the first two or three weeks of the program when we first entered, I had teachers pulling me aside in the hallway, and they were like, what did you do? He is so different. He has improved so much. What is going on? What did you do?

He gave me an order, get me some juice. And I looked at him with a classic look of, what are you supposed to ask me? You know, kind of just that look. I didn’t say anything. I didn’t preface my look. I just looked at him and when I didn’t immediately move, he looked up, he made eye contact with me. He looked at my face and he said, “please may I have some juice?” And it still gives me goosebumps because he had never, up until that point even after being out of the Brain Balance program for a better portion of the year, he had never looked at me, read the look on my face, what it was telling him and corrected his behavior because of it. Just recently in the last two weeks, he has shown us that he can read body language as well.

It’s something that I’m proud of that we decided to do. It’s one of the only therapies that he, or one of the only programs that he’s engaged in where he shows more improvement in six months then he did with the regular therapies in two years. And it was significant, it was a significant turning point for him, for us, for all of the things that we wanted him to be able to do to make his life more enjoyable.

Even while we were in the Brain Balance program I insisted that he maintain physical, occupational speech, and any other therapies. What I noticed after he completed the program was that those therapies were no longer necessary.