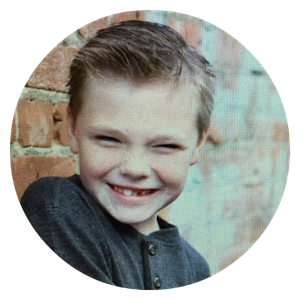 He doesn't yell or get angry at it anymore. We have family game night every Friday night, so we play board games together and the TV is off and we play as a family. He can be involved with the family where he wasn't before.

Luke is high-functioning autistic. Before Brain Balance, my husband and I kept searching for things that we thought would work for him. He is very loving and very gentle, so we were blessed. He’s verbal. He’s an amazing little spirit, but he struggled socially. He struggled academically with just concepts that were a little bit over his head. His sensitivities to things with hearing and on his body, haircuts, that was where we really … It was very stressful for us because going to a birthday party when they would sing happy birthday to him he would cover his ears and scream and cry and everyone looks at you like you’re crazy, right? Different noise levels really affected him.

We did the Brain Balance Program for six months. I work full time. I have four kids and my son has autism. If this family can do it, anybody can do it. You just have to make the commitment.

That staff at Huntington Beach are forever in our hearts forever because they are such a unique group. They genuinely care for your kids. It’s not just a hoax. They just … We felt it the minute we walked in. They worked with him and they didn’t push him. He went at his own pace and it was beautiful because no matter what I knew that he’s okay and they weren’t going to turn him away. They were going to let him go in time and they were very patient with him.

Melt-downs are now few and far between. He’s made friends with other children. He logically understands boundaries and learned to self-regulate. His sensitivities were almost completely gone. That was a big thing, his listening, and things. At school, he was able to focus a little bit better. He was able to sit with another child, one or two children, and actually play a board game.

They are gold. You will not find a group of people who care about your kids more than these people at Brain Balance do, and that means a lot. I really believe in what Brain Balance does. I really wish them all the best and hope that it stays around for a very long time.