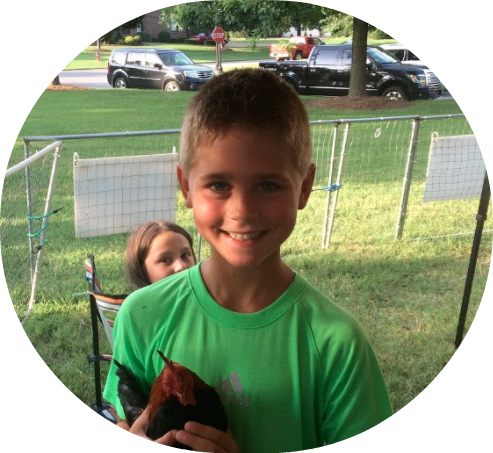 He walks in the door at Brain Balance, he loves the staff there. They love him. They have become like family. They’re so welcoming and hospitable. He absolutely loves going. He has never once said, “I don’t want to go.”

He was trying super hard. All of the teachers were like, he gives at 300%. That's why when he would get home he was falling apart. He was just done.

We had had a lot of struggles for a couple of years just with focus, impulsivity and some behavioral things, like mood swings. His teacher … he wasn’t necessarily struggling academically, but his teacher noticed that he constantly needed re-directing. He constantly needed to be motivated, to either go to do homework or to even go to baseball practice. He just lost interest very quickly, because he got frustrated very quickly. Luke always struggled the most when he was in groups. That’s when he would fall apart. That’s when he would lose his temper or he would come to us in tears.

Then he was becoming kind of disruptive to our family. We felt like he was crying out for help. We decided to start him on medicine. We did medication for a year. We saw improvement. Then after about a year we were back to square one. It was like he was not even on it. It’s just like it quit working. Really, long-term, it’s not what we wanted. He’s nine years old, we know these drugs aren’t super clean. There’s side effects with them. We want to fix the problem. We don’t want to just treat the symptoms. That was really against my belief on how anything should be treated.

We came around to it again. We were literally, throwing our arms up. I was on my porch one day and heard a Brain Balance commercial. I heard these testimonies from these mothers. They were talking about their children before Brain Balance, and then at the end of the commercial they talked about their children after the program. I just felt like they were speaking right to me. I mean, they described my child to a T. They described me to a T, my frustrations and everything. I just thought, what do I have to lose?

I was on board day one. I had experiences with that kind of stuff before Brain Balance, with myself and with Luke. The newest thing for me was just how am I going to incorporate this into my daily life. We were already trying the no dairy, no gluten. We added avoidance of sugar, any refined sugar or processed sugars. I was always good about avoiding added colors and all that. Not even doing the cane sugar and stuff like that, and avoiding those things really made the difference with Luke. After a while, about four or five weeks of it, he told us, “I feel better.”

He has made improvement in the classroom. He has made improvement in his work. Even socially his teachers have noticed differences. Their feedback was that they could definitely tell a difference. His interest in sports, from winter to now, he asked this year to play basketball. Last year he didn’t want to play. He asked not only to play basketball again, but he asked to be put on a team that he didn’t know anybody because he wanted to make new friends. That was a completely different child. He wanted to go to practice every single time there was practice. Last year, year before, we had to drag him there.

I think that it is a much better approach than standard care, which is medicine. Not only has this strengthened and brought Luke up through developmental stages that he was behind in, that was affecting him mentally and socially and physically … I don’t know that this is the last thing we’ll do, but it’s been worth every penny and time.