Now I feel like we can be in public and we can do things just as a normal family. We can do things within our own family. Like I said, Christmas and holidays and things when we’re with our extended family, he’s able to hang out with the other kids

Landon was always the kid that was just acting weird or the other kids are playing and he's running through the house, loud, jerking things out of people's hands. Just no self control.

He had tremendous anxiety. He had very little regulation of his behavior or his emotions. He’s only in the third grade, and he had already had three teachers tell me, “I don’t know what to do with this kid.” He couldn’t get along with his sisters. He was an unhappy kid. He was very negative. His dad and I were really concerned about his future. Usually, parents, you think like, “Oh, where’s my kid going to go to college? What are they going to be when they grow up?” To be completely brutally honest, his dad and I were like, “How are we going to keep this kid from going to prison?” I know that’s horrible to say but that’s because he had a lot of issues with authority. That was really our concern. We felt like he just did not have a future.

We started noticing changes actually pretty quickly. Just within a few weeks, we started noticing changes in him. One of the best things is that we started noticing pretty quickly that he was a happier child. He had a Sunday school teacher who happened to be like an occupational therapist or a physical therapist. Someone that works with ADHD-type children like that. We had never told her, “Hey, he has a problem.” We just went to Sunday school. She actually told us several weeks, many a month in, she said, “I don’t know what you guys are doing with this kid, but you’re doing something because I am seeing a lot of improvements. I am seeing a different kid come into Sunday school.” That was a big deal for us. 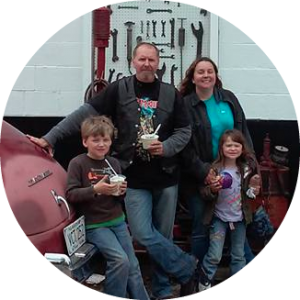 He’s able to get along with his sisters. He’s considerate of them. He’s just had so much improvement. He’s said he’s happier. He’s said … For a while, he really didn’t want to take his Vivance anymore because he said, “I’ve been through Brain Balance. I don’t need it anymore.” He actually said, “I’m not taking that poison. I don’t need it anymore,” since Brain Balance. He feels more successful at school, and he says he’s not as frustrated. We can go places without him beating his sister, being rough to her all the time. We can go places without his dad and I being embarrassed, having a public fit. Now I feel like we can be in public and we can do things just as a normal family. We can do things within our own family. Like I said, Christmas and holidays and things when we’re with our extended family, he’s able to hang out with the other kids.

I feel like I’m spreading the good news. I’ve probably told five different people, “You should really try Brain Balance.” There are some people that I’m like, “I really need to talk to them.” I don’t even know them that well, but I’m like, “I think your child could use some help.” I think that I would recommend it because it changed our family’s life. I feel like it changed my son’s future. I feel like he will be able to be a productive member of society as an adult, and I don’t know that he would have without it. People say, “Oh, it’s so expensive.” You know what? Money is spent … It just is. There’s nothing better to invest in than your child.