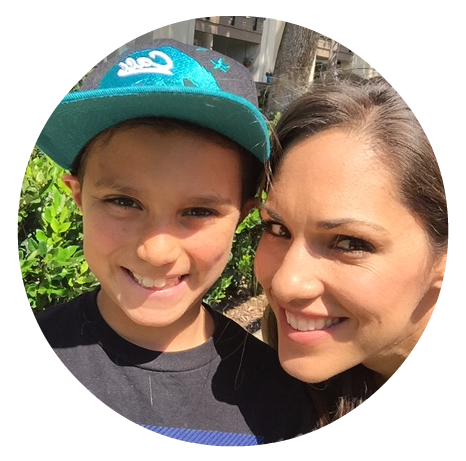 No one wanted to help him. They all wanted to mask the problem, where instead of helping with his fine motor skills they wanted just to give him a computer or a tablet.

He was kind of all over the place. He was very depressed, didn’t want to go to school anymore, was feeling very vulnerable among his peers. He could barely read. He was not able to tie his shoes. He borderline with some possibilities of being ADHD. He didn’t really have any personal awareness where he would just kind of like, come up and just grab you, be up in your face when he was talking to you. There were times where he was very loud when he was talking to you. Here is this poor kid that can’t sit still in class because he isn’t understanding what the teachers are saying, and then he was expected to come home and do homework. Even with myself or my husband helping him, it would still take about an hour and a half to two hours. He has tons of friends. He’s very friendly, but some of the kids did notice that he couldn’t read, and some of the kids were starting to make fun of him for that.

No one wanted to help him. They all wanted to mask the problem, where instead of helping with his fine motor skills they wanted just to give him a computer or a tablet. They told me that at nine and a half, him not being able to tie his shoes is normal. I have three other children. I know that’s not normal. I heard your guys’ commercial on the radio and I thought, “Brain Balance? What in the world is Brain Balance? What could you possibly balance in your brain?” I called and I spoke to the lady on the phone, and I just knew this is exactly where Jaden needed to go. I took him in, I think the next day and had him assessed. Every single one of my concerns had been validated just in your guys’ assessment. We went in and everybody in the center was very welcoming. Jaden just fell in love with Abby from day one. They did their assessment and we left there, and he said, “Mom, when do I get to go back and go play?” He loves the center.

I would absolutely recommend you guys to anybody and everybody that has an issue with their child. For one, because you guys are not promoting the medications. You guys aren’t just masking the problems. You guys are basically attacking those problems and tackling what needs to be handled head-on. As I said, the staff and just the families that you meet there, getting that support as a parent, to go in and know that you are not alone and that you have Brain Balance on your team to help get you the best results possible for your child, was amazing.