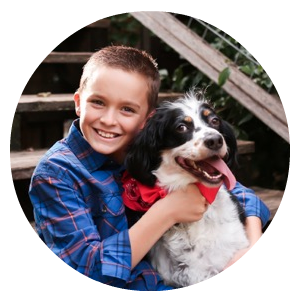 We'd do something 2 and 3 times and he still wouldn't get it. I would get extremely frustrated with him which wasn't good. Now, we do some things maybe twice and he's right on it; he remembers it.

He’s the type of child that falls through the cracks. He’s very well behaved. He’s a pleaser and yet he can’t pay attention. The summer after first grade or second grade we had him tested and he definitely had ADHD and had some processing issues. We were trying to figure out what to do. We did not want to do medication. I started doing some natural things to kind of calm his brain down a little bit. We were sort of at our wit’s end.

I called a Brain Balance Center and thought what the heck we’ll have him tested. Everything that they tested for made a lot of sense and whenever they sat us down and said, “You can tutor all you want and if it’s not on their level, it’s like trying to teach him college material [when] he’s 7 years old.” It just clicked with me. So, we went in and decided okay, we’re going to try this and slowly started to see some changes in him.

We went through the program and did the diet. We were like, well, we’ve seen progress. [Yet] I think I knew in my gut that he wasn’t quite where he needed to be but we saw an improvement.

Then he just started soaring literally; it’s amazing this year. His teachers are really hard. One [instructor] was an 8th-grade teacher [previously] and now she’s a 4th-grade teacher and I think she’s forgetting that these are not 8th graders. He went from not even passing anything in reading comprehension to between a 92 and 95 percent comprehension. He’s 10 and he’s reading on an 8th-grade level. Everything’s come up, everything’s gotten easier.