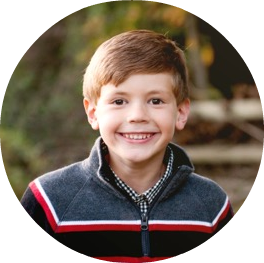 When he couldn’t do something, it was like a complete meltdown. He’d stutter over words because his brain knew what he wanted to say but his expressive language just wasn’t there. Now, the thoughts and the flows are so much smoother.

He was truly disconnected from his own life.

Cooper was developmentally delayed from 18 months and had gone through early intervention from 18 months until 3 with speech therapy, occupational therapy, and physical therapy. He went through a regular mainstream pre-school and did fine at age 3 but at age 4, the teachers started noticing that his growth motor skills and fine motor skills were starting to fall behind again. We are a family that is a direct reflection of falling through the cracks in a school system. That is the most frustrating thing you can ever go through. He had been diagnosed with Sensory Processing Disorder. He still struggled and barely made it through kindergarten. Frustrations and accidents at school – potty training was a big problem. At the end of kindergarten he went off to first grade and everything fell apart. We actually pulled him from school and home-schooled him for the second half of first grade to drive to Brain Balance Center of Lansing to do the program. 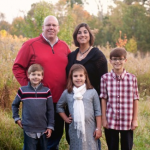 Now, he is thriving. He gained 10 pounds and grew 3½ inches in a 3-month program that he was with Brain Balance. His reading level is way above grade level right now. He’s actually getting math where he wasn’t getting it before. His social life has changed. He had his first birthday party here since we’ve moved. This is the first birthday party that he’s had that had his friends. There were 11 little boys that came over and they were actually kids he invited. He wrote the invitations. He had an opinion and an interest in who was going to be there. Right after that, he was invited to his first play date. Since then we’ve had multiple playdates where someone has actually called me and said, “Can Cooper come over and play?”

We are on the other side of things now and just to see your child smile every single day and know that his self-esteem is changing…I’m a huge proponent of it. I’ve read the books 10 times over and I refer people…if I had a penny for every person I referred to Columbus … It’s amazing how many kids are struggling and how their families are struggling.

When he couldn’t do something, it was like a complete meltdown. He’d stutter over words because his brain knew what he wanted to say but his expressive language just wasn’t there. Now, the thoughts and the flows are so much smoother.