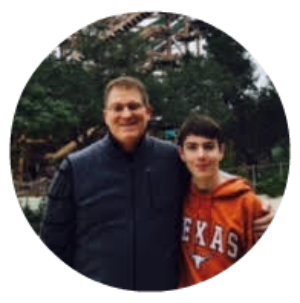 Life isn’t perfect, but I cannot imagine where we would be if we hadn’t gone through that. I kind of felt we were at our wit’s end because we had tried medicine. We tried OT. We would only get incremental, tiny little steps. This was a big jump forward for us.

He had some social issues and some sensory issues. Lots of little problems.

He had some social issues and some sensory issues. We kind of dealt with it for about five years on and off. We found he had some food allergies, so we started tweaking them. That started getting better. He arrived here in his seventh-grade period where he was having a lot of social interactions that weren’t positive. He did know how to relate to people or to react to people more or less than. Lots of little problems. Not any huge problems but many little problems. He had attention and memory issues. He was never disruptive but had attention issues. We had a couple of friends who had used the Brian Balance program in Plano and suggested we look into this. We got him tested and found that he had some areas that really needed some support. We went with it. That was good.

Our center director is wonderful. She remembered that he was in theater, so we saw her again after a year and she just went right into conversations about his theater activities and his choir and such. That was nice to feel that she got to know the child.

He’s paying attention more in class. He is more on task. His teachers don’t have to redirect him as many times. To me, that was a big thing because when you peeve off a teacher, then you’re kind of in a cycle of you’re the stinker in the room. He went up I think it was fourteen points on the overall score in the Texas Star program. Ben said it made him calmer and he slept better, which was interesting. That kind of wasn’t the goal for us, but he said he lived calmer and he slept better. He always would say, “I can remember now what I forgot.” He is not yet perfect. He still drops and forgets things, but now at least he as a clue that he forgot something. He became popular kind of across the board with many different students. He got the lead role in our middle school play. He’s very good now in public speaking and communicating. He’s in the district choirs. He’s in the high school performance now.

Life isn’t perfect, but I cannot imagine where we would be if we hadn’t gone through that. I kind of felt we were at our wit’s end because we had tried medicine. We tried OT. We would only get incremental, tiny little steps. This was a big jump forward for us.