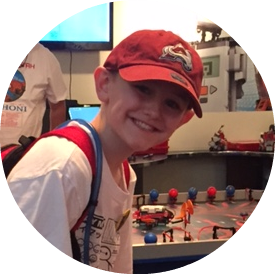 I was very skeptical at the beginning. I did not necessarily believe some of the stuff in the procedures, but after seeing how it worked for AJ and seeing how he has changed, and he has matured, and started to take ownership of himself and his body and time and space. I think it’s really beneficial.

He's really an intelligent little kid, but his penmanship was all scrunched together, and misspelled, and just horrible. Now after Brain Balance with his fine motor skills it's a night and day difference.

He had a very hard time focusing. He was very energetic. His whole body just wanted to move, move, move. Sitting still and focusing on tasks was very difficult for him. He would not write, or if he wrote it was like a sentence and he thought that was enough for a paragraph for an essay. We’d have to repeat directions multiple times to him, and have to continue to remind him multiple times to follow through with things. It was very frustrating for us.

When they first diagnosed him with ADHD, the first thing they wanted to do was try him on all these different drugs. My feeling with pharmaceuticals is that they just mask things, they don’t ever correct anything was my attitude towards that.

He came out of his sessions at the center every time very happy when he improved in an area, very proud of himself, glad when it was prize day because he had earned it.  You could tell he was learning tools to be able to handle things differently. At least giving his core muscles and I think his fine motor skills with his hands really improved his handwriting, and just to hold balance and ability to run and play sports, and throw balls, and stuff like that. His teacher said that she had a noticed a huge improvement in his writing ability, and how much he writes, and the types that he writes, versus what it was at the beginning of the school year.

He is starting to recognize, wow my room is messy, or I need to pick up my toys or let me help you fold laundry. I think, there’s that maturity factor there that we’ve noticed. He’s starting to take ownership of his actions at school, and actions at home. Before he was just going through the motions and he would, I didn’t do anything wrong, I don’t understand why you’re upset with me, I don’t know.

I was very skeptical at the beginning. I did not necessarily believe some of the stuff in the procedures, but after seeing how it worked for AJ and seeing how he has changed, and he has matured, and started to take ownership of himself and his body and time and space. I think it’s really beneficial.