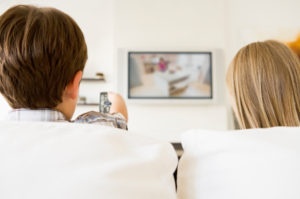 It's no secret that parents struggle with limiting their children's screen time. From watching TV to iPad apps and computer games, it seems screens are everywhere these days. Now, a new study of Japanese children seems to reinforce what most have long suspected: watching TV is indeed linked to brain changes in kids. An article about the study from The Washington Post states the following:

"Now, a new study of Japanese children has linked TV time with changes in their growing brains. And the more television a kid watches, the more profound the brain differences, scientists reported Nov. 20 in the journal Cerebral Cortex.

Researchers studied kids between age 5 and 18 who watched, on average, about two hours of television a day. Brain scans revealed that the more TV a child watched, the larger certain parts of the brain were. Grey matter volume was higher in regions toward the front and side of the head in kids who watched a lot of TV...

In this case, higher brain volume in these kids was associated with a lower verbal IQ. Study co-author Hikaru Takeuchi of Tohoku University says that these brain areas need to be pruned during childhood to operate efficiently. 'Gray matter volume is like body weight,' Takeuchi says: The scales can be tipped by both muscle and fat."

In other words, using the body weight analogy from the article, bigger isn't always better when it comes to brain development. Since correlation does not equal causation, it is important to note that the study did not determine if the larger volume of grey matter was due to screen time, a sedentary lifestyle, or both. It is clear, however, that an abundance of daily screen time means children have less time for play and movement. According to The American Academy of Pediatrics, unstructured outdoor play helps kids develop cognitively and socially. Dr. Robert Melillo, creator of the Brain Balance Program®, recommends that children get no more than 1.5 hours of screen time daily on school days. When families stick to this guideline, unstructured play happens naturally.

What do you do to ensure your kids limit screen time and get enough exercise? Share with us in the comments section below, and contact us today to learn more about our integrated approach to reducing or eliminating symptoms of neuro-developmental disorders in children.

Enjoy These Related Articles:
Setting Rules and Boundaries for Kids with ADHD
Why Don't Kids Play Any More