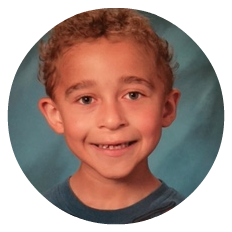 Our approach to him, when he had difficulties with something, I think has changed. For us, it’s only been positive. I don’t think we could say negative things.

When it would come to school, academically, he was suffering. We'd hear from the teachers that he had poor fine motor skills, poor attention span, poor social skills with the other kids, just a lot of disciplinary academic issues with school.

He was a very easy kid for us at home, but school just kept getting worse and worse. He was hitting other kids, he wouldn’t listen to the teacher, he would hide under tables, just everything. School was just really, really difficult for him. Every day, there was a bad report from the teacher, pretty much. Couldn’t sit still, couldn’t keep his hands to himself, had a hard time focusing, paying attention. All of the very typical difficulties in school.

Pretty much our options with Tate were he’s a terrible child, they didn’t know what to do. We contacted a child psychologist because we were very frustrated because we weren’t seeing those issues at home, so we didn’t know what to do. We had him evaluated, and her diagnosis was ADHD, and her only option was Ritalin. She said that was the only option we would have for him to be successful in life. We just were not okay with that. I did some internet searching and saw Brain Balance, gave them a call, and we went in for the interview. What interested me in Brain Balance was the non-medicated approach to helping your child.

When we went in for an assessment at Brain Balance, when we sat down to get the results from Brain Balance, it was the first anybody had given us a reason why. They gave us a diagnosis, but not a reason why, and Brain Balance said things like, “Oh, he has poor eye muscles. He has difficulty tracking words, which makes it difficult for him to pay attention to an item for a prolonged period of time.” For my husband and me, that was a relief. It was like, “Wow, there is something and something we can fix. Something we can help him with.” For us, that was a moment of relief and almost joy, because it was not, “Oh, your child’s just a terrible child, and he needs psychotic medication to make him better.” It was, “His eyes have difficulty focusing, and we can help him.”

Our approach to him, when he had difficulties with something, I think has changed. For us, it’s only been positive. I don’t think we could say negative things. He does better socially. A lot better. He plays gentler with his younger brother. He is always attentive to him. He’s matured greatly.