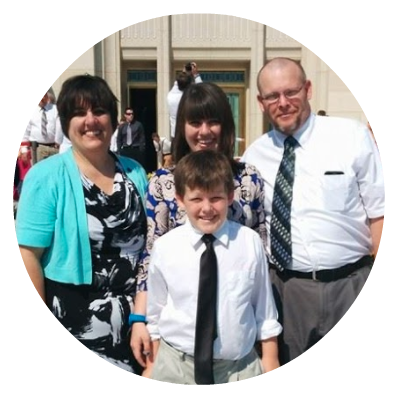 Right off the bat, we saw some differences in him and were excited, and then we’d hit a regression and I’m like, “I don’t know if we’re going to make it through this”, but with the Brain Balance organization I had a support system.

Before Rowdy went to Brain Balance we had trouble with him listening, not just an average listening. If he was in a classroom, any extra noise or movement would distract him, and he couldn't focus.

One of the biggest problems was sensory issues. He also had anger issues, but it would be a result of if he got startled or if someone came up behind him and surprised him, and he’s kind of a bigger kid. He would react, like turn around to push him, or scream, or get really angry. He spent large portions of his time in time-out in his room for hours on end because he was angry, didn’t know how to deal with these emotions, would go into his room and disassemble his room, and then we’d have a whole fight about putting his room back together.

Socially, he had issues with other children. They would maybe play for maybe a max of 20 minutes and then there would be some altercation and they’d all have to go home. Although he was sensitive towards others, he would say things that were hurtful to the people. He couldn’t really relate to the things he was saying, seeing the results of people feeling bad or being hurt. Showers, he couldn’t take showers. They would take 2 hours minimum because it was too hot, it was too cold. Fireworks, we’ve never been able to do fireworks without having like the headphones for when you shoot guns. He would have to wear those in a movie theater. Certain clothes would bother him. If he got like a drop of water on him, he would change all of his clothes.

I wanted him to have every advantage, every opportunity. We had gone to therapists to talk about the anger. We had him evaluated at school and they said, “No, he’s smart. He knows what he’s doing. He doesn’t need any help.” We did occupational therapy where they did pressure therapy and wearing like the tight clothes that were supposed to help him, a behavioral person coming to the house. We were just running through a gamut of things that was only a Band-Aid for one issue or another, but never really helping him overall to progress.

When I first took Rowdy in for an evaluation, again I was apprehensive to be hopeful because of the many different things that we had tried. I was hopeful but tried to keep my hope at a reasonable level because I was expecting yet another disappointment. When we went in for the results, I guess what really got me is that they were explaining to me the behaviors of my son that I hadn’t told them, and I thought, “How can this be?” All they did was these little things for a few hours on a Saturday, how do they know these things about him? They don’t know him. They haven’t been around him. They don’t know these things, and yet they know these things.” That was pretty much the selling point for me.

Right off the bat, we saw some differences in him and were excited, and then we’d hit a regression and I’m like, “I don’t know if we’re going to make it through this”, but with the Brain Balance organization I had a support system. I had people that I could talk to and say, “No, I really don’t think this is one of those regressions you were talking about; this is really, really bad” (laughs), and they’d say, “No. This is really, really good.” It was like having a support system there.

A couple of the breakthroughs … My husband took him fishing, and he sent me a picture, and he was wet from head to toe in his clothes, and I said, “What in the world?”, and he said, “He just walked into the pond and started catching frogs with these girls” … lost his shoe in the mud, soaking wet, and this was a boy that within 3 months prior would strip naked if a drop of water landed on him. And then we had the Fourth of July, we did fireworks, and he didn’t have to have the headphones. We didn’t purposely leave them. He did fine. Not one of them bothered him. These sensory things are starting to go away. We’re to the point now he can be in and out of a shower in 15 minutes. The temperature is not an issue. His clothes are not an issue.

It’s so much more peaceful. There’s joy. There’s happiness. I didn’t get him over it. It’s not a matter of teaching. It’s a matter of connecting. That’s, literally, the only way I can explain it. You can try to teach somebody, but if there’s not a connection, if the connection was never made, you can’t teach it.