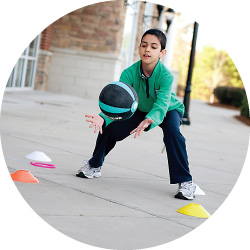 To anybody considering the program, I would strongly recommend undertaking it. The commitment needed is considerable; the outcomes achieved were beyond our expectations.

Matthew had been diagnosed with ADHD.

He had some issues at school and plenty at home. He had learning support at school to assist with classroom activities, because carrying out more than two specific tasks was nearly impossible. Academically, he was achieving better than average results for math and spelling. However, his reading comprehension was significantly delayed; in grade three he was barely at grade one reading level. Matthew was holding his own in some academic areas. Our problem was finding a solution to fixing his other deficiencies. Being from Australia, we started by skyping Dr. Jackson in North Carolina and discussing Matthew’s issues, his test results to date, and how Brain Balance could fit in. It was inspirational. That led to a two-year journey, culminating in Matthew and myself meeting Dr. Jackson face to face.

Approximately eight weeks into the program we started noticing changes in Matthew’s energy levels and conversation behavior. During the second half of Matthew’s program, more changes were becoming apparent. He displayed emotion while watching a film, cared when he upset or hurt someone, and generally just displayed a greater amount of confidence and maturity. After his return to Australia during April 2014, we have found Matthew to be more active, less prone to tantrums, and have a newfound sense of humor. The staff at Brain Balance were very friendly and professional, willing to go “above and beyond” in many instances. Thank you to all at Brain Balance for giving Matthew a future we could only dream of beforehand.