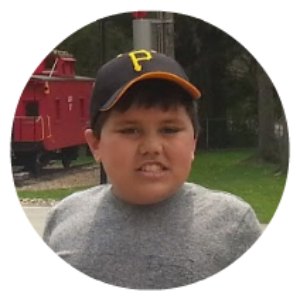 His main issues were the speech and the communication. He talks but we never really had communication, like exchanges back and forth.

His main issues were speech and communication. He talks but we never really had communication, like exchanges back and forth. He could tell us when he was hungry, he could tell us when thirsty. He can read, he can read fine, he actually loves to play on words but like the communication of the back and forth was what we were missing. Now, there’s definitely a change, he definitely talks a lot more and he’s also initiating conversations.

He’s a picky eater. I can count on my hand how many foods he’ll eat. He’s still not eating a salad but he’s definitely willing to try more and different things.

Sometimes he just goes back to his room because it’s just too much and then other times he gets along with all of his friends, which he didn’t do that before, he would try to segment himself off from everybody.

Before I wouldn’t have even attempted to take Jimmy to a school play or any of these activities because I know he wouldn’t fit or he’d be too noisy or whatever else. We had to go to a Christmas play and he sat there the entire time. Even just last night Tim’s son had a hockey game and I said well, we’ll go we usually last about a half-hour, we go separate and then I’ll take him when he’s done, we stayed the entire time.

After we got through it and we saw some changes and then we saw more changes, and they’re subtle, they’re not all at once but as a parent, you have a kid that has these types of issues, any little bit is…it could make you go from not going to a play before now you can go as a whole family to a play. I mean, how do you measure that? Just going to a hockey game. Normal stuff like that, he can go do normal stuff now and be part of the world.

Brain Balance students progress an average of 2.6 levels in 3 months for sensory motor exercises. On average, customers surveyed rated their satisfaction at 8.5 on a 10 point scale. Over 84% of customers said they were very likely or extremely likely to recommend Brain Balance to a friend or family member.