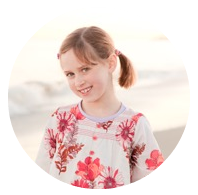 She had ADHD characteristics. So, we went to see a psychologist and her pediatrician and we talked about different things. She was having trouble socially with friends, having trouble focusing at school, just generally seemed unhappy. She just couldn’t seem to connect with other kids. She always had trouble sleeping. She was immature, she was angry, she just was a lot of work. We learned more and more about ADHD and the immature brain and all that stuff. We felt like that fit her so we opted to put her on medication and we started with Concerta and as soon as we put her on it, it was like her personality changed. It was like, she turned into a zombie. We had taken her off of it over the summer because we just didn’t want her to be on it because we didn’t like the way she acted; and then, we put her back on it when school started in first grade, and she became even worse. She became paranoid and she always thought there were bugs crawling on her and bugs in her room, and just, so unhappy. Our whole family was focused on Charlotte. She just drove everything.

We noticed so many different things as soon as we started Brain Balance. Almost instantaneously and we started to notice changes with her and it kept getting better, and better, and better. My parents noticed it and our friends started to notice it and she started to interact differently at home, and she stopped getting in our bed every night. She just wasn’t so scared. We switched her to another school this year in addition to another series of Brain Balance. She’s in first grade now, we kept her back a year and put her back in first grade and she’s a different child. I’m so happy. It’s been so much easier. I think it’s been easier for all of us. We’ve been happier.