It’s a completely different life. He is back to not only being a little boy that’s not longer afflicted with a neurological disorder, but he’s also surpassed that. He’s just growing every day by leaps and bounds, it’s amazing.

My son is the proof that a lot of children don't need medication. They need a diet change, and they need parents to pay attention to them enough, and to be in tune and have a grasp on what they're dealing with enough, to understand it and help.

Prior to Brain Balance, Aidan had started kindergarten, and that’s when things really started to change. He couldn’t sit still in class, he didn’t want to pay attention, was very antsy, wanted to play with kids instead of doing his work and sitting still. In the first semester of his kindergarten year, my son had so many issues with spacial awareness and understanding how to interact with other kids, like who was joking versus who wasn’t. He’d be triggered and get very angry and sometimes violent depending on what the other kids had done to him. But once he was triggered, it was pretty much out of control. And he was suspended for fighting on the playground because there’s a little girl trying to get off the slide, and there were two boys there that wouldn’t let her off the slide. So Aidan walked over and said to stop and to let her off the slide. And the other kid had turned around and pushed him, so Aidan beat him up.

At that point that we said okay, it’s time to get an evaluation done. We had first gone to the pediatrician that his mother had set up for him. The problem that we ran into was the doctor had sat with him for about thirty to forty-five minutes and prescribed him Adderall. It was a ten-milligram pill which he took before school and when I picked him up from school he was virtually a zombie. He ended up getting sick and throwing up until 10:30 at night. That’s when I decided that we needed to find a different approach to this, and there had to be something else.

We didn’t have the main problems and find Brain Balance until the start of is his first-grade year. That is when things kind of fell apart, and he was suspended ten times in the first marking period. State social workers were getting called in, his teacher had basically given up on him. We had to go through the IEP process, which many families that go through the Brain Balance program, they all know this story because they’ve been through it. They have to get an individualized education program set up through the school, and it’s just a whole lot of going back and forth with a school institution, and it never really works out how you think it will, and it usually causes a lot of stress. Stress on the child and everything else. That’s when we had started the Brain Balance program.

About halfway through the program, it was like a light switch went off. I came home from a session and my son actually walked in the house, he walked into his room, he cleaned his entire room. Then he went into my bedroom, he cleaned up that. Then he went into the living room and he picked up all his toys, and then I didn’t hear anything from him for about fifteen minutes. All of a sudden, I heard in the kitchen, a bunch of dishes rattling together. So I peeked around the corner, and I actually have pictures and video of this, I peeked around the corner and he literally perched himself up on the counter like a little gargoyle, and he turned on the water, added soap, and he was doing the dishes for me. I looked at him in disbelief and I said, what are you doing? And he said it to me exactly, well Dad, it seems to me that you do so much for me, that I came home and decided I needed to do some stuff for you to help you, so that way you can sit down and you can take a relax. It floored me. It brought tears to my eyes. I just was stunned and shocked. Things just kept getting better by leaps and bounds. He was blowing through the program, he was doing exceptionally well with all the testing at the sessions that he would go to at Brain Balance.

My son has even told me, Dad, remember when I had ADHD? It’s just crazy to me, that he’s that conscious of it, and that he has been able to look at it that way. 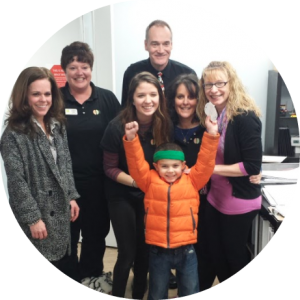 About a month ago, we went through my IEP re-submission and the special education programs teacher here at the school, sat down and told me that the IEP that was created last year has been utterly blown away by Aidan. He not only met all of the goals in that IEP, but he surpassed all of them. He only went through the program one time. He spent three months there. I’m proud to say that I’ve kept him on that diet. I have not deviated or changed it. I’ve kept him on the diet that the nutritionist gave me when we went through Brain Balance, because why would I go back? Once that helped him and took all of that stuff out of his system, it changed everything. His demeanor changed, the excitable times that he used to have. My son used to run through my living room like a cat would, bouncing off my couch, my walls, everything. Now, he comes in, he sits down, he does his work. I don’t even have to tell him to do his homework half the time. He wants to get it done and out of the way because he wants to play, so he bares his focus and is prioritizing his … Keeping his priorities straight. He comes in and knocks out his homework, and then he goes about his business. He plays and does all sorts of stuff.

He’s very social and gets along with other kids now. When I pick him up from school, every single time he walks to the door, almost every kid that comes out the door that’s his age says “Bye Aidan! See you tomorrow!” Everybody knows him, everybody likes him. He’s been on the school news here six or seven times already doing weather reports, news reports, things like that. It’s just absolutely amazing what he’s accomplished. The most success that you will see is based on how hard you try, as well as your child. So you have to go through and eat the same foods, do it with them. Show them that you’re with them and you’re on board with them. Keep an open mind.