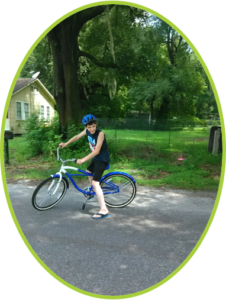 “I would tell them how much of a worthy investment the Brain Balance program is and share all the marvelous learning adventures we are having.”

“Phoenix [was] a very active and impulsive child.  He would not stop when told and would proceed toward dangerous areas and he would walk into various offices interrupting conversations.  Because of his impulsivity, it has been difficult allowing him to stay outside in our fenced in yard, because he would leave the yard to run up and down the street thinking this was a fun thing to do – talking to motorists as they slowed down or stopped for his safety.  Also, Phoenix has lack of balance for riding his two-wheel bicycle.

Today, Phoenix can safely ride his bicycle on the road near our home.  He has become more cautious around traffic and does not impulsively run into traffic.  He listens to commands and requests to stop or slow down.  He doesn’t barge in to other people’s offices, waiting for their acknowledgement that he can proceed in.  I see more confidence through himself.  Crossing roads and riding his bike.

I have a calmer child who is confident in himself.  Phoenix can and does engage in deep conversations, not just wild chattering.  His reading has also improved.  He is reading food labels, advertisements, and will look things up in a dictionary and be involved in cross referencing.  This is a brand new awakening in learning.  A whole new world of learning has opened up!

Everyone at the Jacksonville Brain Balance Center treats you like they’ve known you for years.  We have family here.” 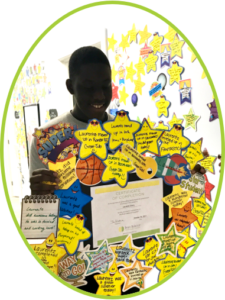 At the age of thirteen my son could not even pick what to wear for school or to go anywehere.  His understanding and speech were very low; it felt like his hearing and comprehension were worlds apart. The worst part is his effort in school became less and less.  My child and I were both lost, then we found the Brain Balance Program.

Now, Laurentz chooses his school close with confidence & is doing really well in school.  His self awareness has improved greatly.  Before the program, he would not finish his classwork so it would be sent home as homework.  When he got home he would hide the papers under everything he could.   Now all his classwork is done in class!  My pride as a parent has been restored.  It is wonderful to see the satisfaction and joy in my son’s face when he accomplishes tasks that he was not able to perform before the program. Words cannot describe all of the great changes.

“It’s hard to put into words, how you feel when you really get to see your son again…”

We tried every kind of therapy and method that our insurance covered until all options were exhausted.   He had been to Occupational Therapy, Physical Therapy, Neurologists, Chiropractors, various pediatricians and a Psychologist.  Brain Balance had always been in the back of my mind.  Once the assessment was complete, I felt a huge weight lifted off my shoulders.  I finally had an answer of WHY my son acted out.  I just don’t want him to be labeled with a disorder and put on medication.  Brain Balance is an alternative and it saved us.

Dylan is a completely different person now.  I finally get to see the person that was “trapped” inside his own body.  My family can function normally now.  So much stress and frustration is gone.   We are all so much happier and most of all Dylan is!  He told me does not want to act badly and he knows Brain Balance helped him.   We travel, transition easily and don’t have any arguments or meltdowns.  If he becomes overstimulated, he tells us.  It’s effortless and that is the way it should be.  He also now enjoys sports.  He loves football and karate.  He used to stand around and watch the football and not run or do what he was supposed to.  Now he’s running for touchdowns!  He also moved up to the next level Karate class and is testing for a yellow belt.   His Karate instructor said they see a completely different kid now, and are so proud of him.